At one time, Botox may have been considered treatment for only the wealthiest in society, but its use is becoming increasingly common among many groups in society, including young women. However, Botox side effects can be serious when the botulinum toxin spreads from the injection site to other areas of the body. On top of all that, there are charges from both US coasts that people have been injecting clients with counterfeit Botox. 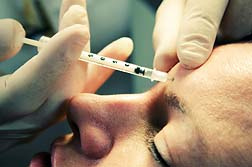 According to an article in the Seattle P.I. (August 25, 2009), the owner of a Bellevue salon faces charges that she illegally injected counterfeit Botox into customers. The owner was arrested after she allegedly continued to conduct the injections despite a cease and desist order issued against her in July, 2006.

The salon owner, Faith He, came to the attention of state health officials when a patient reported she had received a Restylane treatment at the salon but her face became enflamed. The same patient said the medicine used in her treatment came from a container with Chinese markings.

A second patient said she required plastic surgery to fix the sites of her injections. According to the article, the injection sites had become hard and swollen.

The charges against He reportedly include injecting counterfeit Restylane, a wrinkle-remover available by prescription, into customer's faces and offering counterfeit Botox for sale. He is licensed as a manicurist and aesthetician, according to The Seattle Times, but is not a doctor or health-care provider. Restylane must be administered by a doctor.

More BOTOX News
Meanwhile, a New York plastic surgery practice faces allegations staff gave patients a Botox substitute that was not approved by the US Food and Drug Administration (FDA). The staff, five doctors, a nurse and an administrator, pleaded guilty to injecting approximately 150 patients with Botulinum Toxin Topic A, a cheaper product than Botox. According to an article in Newsday (August 11, 2009), the fake drug was distributed by Toxin Research International, Inc, but the company was shut down by the FDA in 2004.

Approximately 200 physicians across the US purchased the fake drug. Some of the doctors have argued that they believed the drug was legal because of the company's marketing tactics. An attorney for one of the doctors who pleaded guilty said his client did not knowingly inject patients with a substitute drug and did not intend to give a drug that was illegal.

If you have suffered losses in this case, please send your complaint to a lawyer who will review your possible [Botox and Myobloc Lawsuit] at no cost or obligation.
Request Legal Help Now