There are various laws that govern the conduct of motor vehicles, together with bicycles on public thoroughfares. While observing these statutes goes a long way in helping to avoid bicycle crash injury, there is always room for improvement—and lawmakers in Kentucky are considering just that, in an effort to prevent the next bicycle accident from happening. Anyone who has ever been involved in one knows that a bike crash is no fun. And it could be fatal. 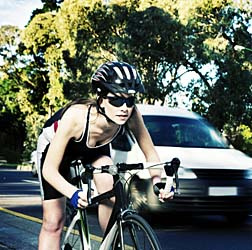 Hence, the plans for a Bill in the State of Kentucky that would authorize police officers and state troopers to charge drivers with 'vehicular assault of a bicyclist or pedestrian.' Bicycling for Louisville, a bike advocacy group, is of the opinion that existing laws in the State of Kentucky fail to punish drivers who injure, or even kill, cyclists. Barry Zalph, executive director for the group, lays the blame squarely on Kentucky law.

Those laws of the State prohibit police officers from issuing citations for traffic violations that include striking a cyclist. "What you have are cases where there was evidence of driver neglect or at least irresponsible actions and the police did not do anything," says Rep. Jim Wayne, a local Democrat who plans on sponsoring the Bill. "And what this does is certainly strengthen the hand of the police--if there is evidence."

Critics of the measure cite the fact that law enforcement officials wouldn't necessarily need to witness a crash to issue a ticket, and there is fear of putting too much power in the hands of the police. However, bicyclist advocates who are concerned with the number of bike crashes and bicycle accident injury—and death—say the tougher measurers proposed come just in time to protect cyclists.

Advocates cite the average of about 20 pedestrian and 3 cyclist deaths each year in Louisville, after the unfortunate victims come in contact with a much larger, heavier and unforgiving car or truck. In fact, it has been reported that about a third of all fatalities in Kentucky occur in Louisville, Zalph told the Courier-Journal here.

Critics of the proposed Bill, while supporting the inherent intent of the new law, note that in such incidents vehicular homicide laws apply and cyclists injured in bike crashes with cars can seek civil penalties.

However, those on the other side of the debate point to a series of high-profile car-bicycle crashes in which the drivers were never charged. One of those deaths involved George "Chips" Cronen Jr. Back in July of 2007 he was struck by a van while riding his bicycle along the Clark Memorial Bridge in Louisville. That collision, it has been reported, propelled the doomed cyclist into a steel girder.

Of course, the proposed law would work the other way as well. "If a bicyclist recklessly crashes into another bicyclist or pedestrian, a bicycle is a vehicle under Kentucky law so the bicyclist would be liable," Zalph said of the intent to define a bicycle as a pedal-propelled vehicle. In that sense the proposed vehicle assault charge could apply, equally, to the cyclist.

More BICYCLE CRASH INJURY News
Regardless of the posturing of the critics, Kentucky is poised to set an example for the remainder of the country to follow, given the uncertain economic times, and the overall push for Americans to reduce their carbon footprint. Commuting via bicycle is a cheap, healthy and an environmentally friendly alternative to the car.

As more Americans take to the road with two-wheeled pedal power, such a focus on the laws of the land and the respective relationship between motor vehicles and the non-motorized variety could not have come at a better time, with an eye to avoiding the bike crash and bicycle crash injury. Given the wide diversity of weight and girth between the two bastions of the road, and distractions from cell phones, high-end stereos and GPS systems, the bicycle will always carry with it certain risks. But perhaps the rate of accident incidence can be somewhat mitigated.

We could all benefit from that.

If you have suffered losses in this case, please send your complaint to a lawyer who will review your possible [Bicycle Crash Injury Lawsuit] at no cost or obligation.
Request Legal Help Now