Drunken Driver Mows Down Cyclist With Children in Tow

This is a bike accident that's high on the "Oh…..my……GOD!" scale. And little wonder. This bicycle accident involved a father, trying to do the environmentally sound thing by taking two young children out for some fresh air and little exercise, only to be blindsided by a drunk, homeless man stealing a truck and driving into the trio, causing a bicycle accident injury. 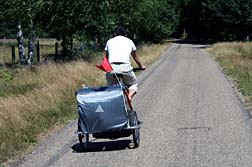 "Peter Hardie, an avid cyclist and father of two, was pulling a bike trailer containing his son Noah and a young friend, Olivia Lee down a quiet, narrow road at a Cultus Lake campground in British Columbia, on the western coast of Canada, in July of last year.

But Garry Joseph Peters had other ideas. Peters, at the time, was a homeless man who had been invited by a family to enjoy a little bit of recreation at a campsite at Cultus Lake. After downing five or six beers, Peters got behind the wheel of his host's Ford pickup and steered the vehicle into the campground, eventually traveling at a high rate of speed along a narrow campground road.

He was also going the wrong way: a bicycle accident injury, waiting to happen…

As the truck slammed into the bike and the bike trailer, Hardie was sent airborne, while the bike trailer became detached and was dragged by the truck for some 50 feet, the children still inside. Needless to say the trailer was demolished, and the panicked parents running up to the mayhem when the truck finally stopped believed both children would be dead.

Hardie rallied from his bicycle accident injury and ran over to find his son face up in what was left of the trailer, conscious but scared. His little friend Olivia Lee wasn't so lucky. She was found facedown but unconscious, and had suffered various injuries—among them a broken arm, a skull fracture and various contusions and abrasions. The little girl has since had several surgeries and will require several more. The boy also received a concussion, and abrasions.

His mother, Kirstie Hardie, was expecting her third child at the time of the bike accident, and the frightening incident involving her husband and her son triggered premature labor pains. The two children along with Mrs. Hardie were airlifted to hospital, and luckily the expectant mother was able to carry her pregnancy to full term and deliver a healthy child.

"Both children were terrorized by this incident and have ongoing psychological injuries that require treatment," Chilliwack Provincial Court Judge Russell MacKay said in a written judgement released this week.

The judge added these comments, to add additional weight to his words: "All of the family members were, quite naturally, traumatized by this incident given they had initial cause to believe that [the two children] had perished."

While this particular bicycle accident was caused by a drunk driver, a bike accident can be triggered from any number of events that combine a large, heavy and fast car or truck with a much slower, lightweight vehicle like a bicycle. When the two forces meet, the result is almost always bicycle accident injury—or even death.

Luckily, the latter was spared here.

If you have suffered losses in this case, please send your complaint to a lawyer who will review your possible [Bike Accident ] at no cost or obligation.
Request Legal Help Now