It might be in the contaminated soft drink you're gulping down on a hot day, in the water you're using to make coffee. It might be in the very air you breathe. Benzene is a known cancer-causing agent - and you'd be surprised to know just how prevalent the stuff really is.

In fact, benzene ranks among the top 20 chemicals produced, and is used as a solvent for a wide variety of industrial applications - notably the rubber industry, shoe manufacturing, oil refineries and other plants where chemicals are routinely used. According to the American Cancer Society (ACS) website, 237,000 workers in the United States were identified as being exposed to benzene in 1987, the year a study was commissioned and data analyzed. It is not known if the numbers have changed in that time. 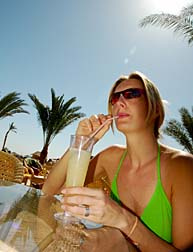 "But you've never been around a chemical plant, so you should be safe from benzene, right?

If you live in a large urban centre with heavily travelled roads and gridlock traffic, you can be potentially exposed. While levels of benzene found in air are generally low, they can spike much higher in a big city with higher vehicular use.

Cigarette smoke is another source, and you don't have to be the smoker to be exposed.
According to the ACS, cigarettes are known to release between 50 and 150 micrograms of benzene per cigarette, and therefore remains a sustained source for benzene contamination of the air - and your lungs. As nasty as some chemical and industrial plants can be on the benzene front, cigarette smoke accounts for as much as half of benzene exposure in the United States, and 89 per cent of exposure among smokers. Second-hand smoke represents 10 percent of benzene exposure among non-smokers in the U.S.

Okay, so you don't smoke and you don't hang around anyone who does.

Not if you drink a lot of soda. That's because benzene can form as a by-product of the manufacturing formulas of soft drinks and consumer beverages containing Vitamin C (ascorbic acid) and the benzoate salts that are often added as an inhibitor to the growth of bacteria, yeasts or moulds. When these combinations are present in the final product, benzene formulation can be triggered by exposure to heat or light in the shipping, or storage environment.

The U.S. Environmental Protection Agency (EPA) sets the bar for benzene at five parts per billion (ppb). Anything above that - even 6ppb - is considered unsafe. The U.S. Food and Drug Administration (FDA) has been aware of the problem since 1990 and keeps in close contact with the beverage industry with regard to their formulations. The Center for Food Safety and Applied Nutrition (CFSAN) sampled more than 200 soft drinks and other beverages between 2005 and 2007. Most contained benzene levels well below the standard. The few that were above 5ppb were required to alter their formulation.

There are notable exceptions, however. Back in July a number of beverage manufacturers including PepsiCo, Sunny Delight Beverages Inc, Rockstar Inc., Polar Beverages Inc. and Shasta Beverages Inc. were named as defendants in a lawsuit over the levels of benzene found in their products.

PepsiCo's Diet Wild Cherry Pepsi was found to contain four times the acceptable level of benzene. The manufacturer has since re-formulated the soft drink to mitigate benzene contamination.

For some, benzene is in the water they drink.

For a pocket of residents in Fayetteville, North Carolina benzene contamination represents a stinky odor to their water. For over a decade now a collection of Fayetteville homeowners have had water quality problems originating from a nearby filling station leaking gasoline into the water supply. The gas station is long gone, but the contamination lingers.

So now comes the big question. Does benzene cause cancer?

According to the American Cancer Society, the National Toxicology Program, and the International Agency for Research on Cancer - it does.

The deaths of about 750 Pliofilm rubber workers at three facilities in Ohio were tracked over the course of thirty years. With little evidence of exposure to any chemical other then benzene, the study determined an increase in leukemia, and multiple myeloma - a cancer of immune system cells in bone marrow.

And a study by the American Cancer Institute in conjunction with the Chinese Academy of Preventative Medicine followed an astounding 30,000 exposed workers through 233 factories in China, and compared them to a similarly sized control group of workers that were not exposed. The huge sample size helped determine that yes, there is a risk of cancer from benzene exposure even at low levels at less than 10 parts per million.

More News
That's still a lot higher than the 5 parts per billion associated with consumable beverages. But the risk is no less palpable, especially for individuals who have become sick in association with heavy soft drink consumption.

In the end, whether inhaled or ingested, benzene is considered a cancer-causing agent in humans. As noted above, the EPA regulates the presence of benzene in consumables at 5ppb, with the ultimate goal of 0ppb. Meanwhile, the National Institute of Occupational Safety and Health (NIOSH) and the Occupational Safety and Health Administration have identified a limit of occupational exposure to benzene at 1ppm during an average workday, and recommends personal protective equipment such as respirators.

Any consumable product contaminated with benzene, or work environment that carries higher levels for benzene than those limits noted above, are defying strict regulations, and may be exposing individuals unnecessarily to a known cancer-causing agent.

If you or a loved one have suffered from cancer due to Benzene exposure, please contact a lawyer involved in a possible [Benzene Lawsuit] who will review your case at no cost or obligation.
Request Legal Help Now

Posted by
James B Dowd
on August 24, 2014
Just diagnosed with probable Waldranstrom's Disease (WD) a form of Multiple Myeloma. Normally, effects those over 65, Male, and Black. I am 71, Male, and White. However, the experts believe can be caused by exposure to chemicals, such as benzene, and pesticides. I have seen 2 oncologist and one hematologist, they all conclude WD...based numerous blood tests and bone morrow biopsy...probably. Now have to wait until my glands start to deteriorate, before they start Chemo, which will not cure it...but just extend, hopefully, my life for a few more, not to comfortable years.

I worked in the printing trades since the age of 15, to 1978, 20 years...16 with Triangle Publications Inc., (TV Guide, Seventeen, Sunday Inserts...then owned by Walter Annenberg). Until OSHA banned it we used chemicals like Carbon Tetracloride, Tricyline, Triethenol, Sodium Bi-chromate, Sulfuric Acid and its fumes, Sodium Hydroxide (really bad stuff), Iron Cloride, and solvent based inks and more.

1964 to 1966 was in the Army, drafted, Ft. Jackson, NC. There were rumors that they tested agent Orange there. I sent basic there and then another 8 wieeks for advanced infantry training too. I had heard they were dropping white powder from planes on some of the troops...while not on me, it was on the ground throughout the Fort.

This was the first time, I got pneumonia too, they called it walking pneumonia, and would have hospitalized me. Gave choice to tuff it out, with anti-bi-otics, or get re-cycled...I was 5 or 6 weeks into to basic then.

I have had chronic sinus and URIs ever since and also developed ulcer condition too. I have also had pneaumonia 3 times since then and now have, for the first tiem, nodules, and most recently glasspar, appearing on my lungs.

I just know, it is from these chemicals and now my system is weaker and breaking down.... but how to prove it.