The Benzene in your Beverage could Kill You

Benzene is a word you should get to know--especially when the same chemical that goes into the manufacturing of things like insecticide and petroleum, starts to show up in soft drinks.

Benzoic acid is used as a preservative in a host of consumer soft drink products. In its original state, benzoic acid is thought to be harmless. 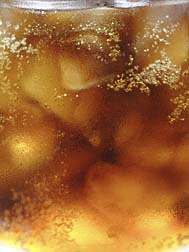 The United States Food and Drug Administration (FDA) has done testing on a wide variety of sodas and consumer beverages, and so far has found four products to contain levels of benzene above an acceptable standard. Those products include Crystal Light Sunrise Classic Orange, Fanta Orange and Pineapple sodas, and Sunkist Orange soda.

However, there is much more to this story the deeper you go. And benzene at high levels is not only unsafe - it could kill you.

Let's get away from soft drinks for a minute - we'll come back to it - and head to the refineries, where workers who've spent a lifetime toiling in the production of petroleum products and related goods have been dropping dead or dying from a lifetime of exposure to the same stuff that's in a lot of your soft drinks.

Workers at the former Amoco refinery in Sugar Creek Missouri have either died from, or are dying of Hodgkin's Disease, leukemia and lymphoma - diseases linked to exposure to benzene, which is a known carcinogen. Several dozen lawsuits have been brought against Amoco citing the long-term exposure to benzene, with 29 cases still to be heard.

At the very least, the workers are hoping they will live to see their day in court. Half of the refinery employees have already died.

Meanwhile, a 7-Eleven store in Indiana formed the basis of a new law in the State that sets strict regulations for how and when the public is informed when a chemical spill occurs, and sets out who is financially responsible for cleaning up any toxic soup that leaches into the ground, and the groundwater. The law went into effect July 1st.

The law had its beginnings in the discovery of 800,000 pounds of contaminates located underground at a 7-Eleven store, chemicals that included benzene at levels 1400 times greater than the acceptable level.

In other words, benzene is powerful stuff, and a definite concern in that it is linked to the development of myelodysplastic syndrome or MDS, which affects the blast cells in bone marrow. According to Dr. David T. Bowen of the University of Dundee Medical School in Dundee, Scotland, the latency period varies between exposure to a causative agent (such as benzene) and the emergence of MDS. For benzene, it could be up to 30 years after initial exposure.

For workers and their families at the Amoco refinery in Sugar Creek, the emergence of health problems could hardly be viewed as surprising, given the conditions in and around the refinery at the time it was operating. Originally opened in 1904, area residents from about the 1940s on recall a constant petrol fog surrounding the town, and petroleum fumes in their homes. Amoco closed the refinery in the 1980s and began cleaning up the site the following decade. Millions of dollars were paid out to homeowners who litigated over damage to their homes, and loss in property value.

In an environment like that, one could envision health problems.

But tell that to [Dr. Todd Molis] of Chicago. His wife Judy was diagnosed with MDS in 2004 and died at the age of 59. She was never around a refinery, nor did she work in any industrial application.

But she drank cola. A lot of cola. And Dr. Molis, a dentist, thinks he knows what killed his beautiful wife.

The FDA is on record as saying it has not only found benzene in soft drinks and other liquid consumables, but notes it is finding levels higher than the accepted standard of 5 parts per billion (pbb) as set forth by the Environmental Protection Agency (EPA). The EPA, for its part, is of the opinion that based on the risk factors no level of benzene can be considered safe. It has set the acceptable limit of benzene in drinking water as 5 ppb, but maintains its position that anything above 0 ppb isn't good for you.

That said, the appearance of benzene levels above 5 ppb in some soft drinks is beyond the power of the EPA, as it does not regulate consumable drinks beyond bottled water. The remainder fall under the jurisdiction of the FDA, which regulates contaminants found in consumable goods. Curiously, benzene is not on the list of contaminants the FDA regulates.

In an article written and posted online by Urvashi Rangan, director of Consumer Report's Greenerchoices.org and a senior scientist and policy analyst, the appearance of benzene in soft drinks can be explained by the inherent behaviour when ascorbic acid (Vitamin C) or erythorbic acid combines with a benzoate salt (Sodium Benzoate or Potassium Benzoate).

According to Rangan, scientific studies and Consumer Report's own tests have determined that exposure to heat and light serves as a catalyst for the chemical reaction to introduce benzene into the product. Once produced, it is impossible to determine by taste whether or not the consumer is ingesting benzene, and while the risk factors of low-level exposure to benzene are admittedly difficult to quantify, according to Rangan, it doesn't mean there isn't one - especially for people who habitually consume a lot of soft drinks.

Which takes us back to Dr. Molis and his late wife. He would like to know, among other things, just what the soft drink companies know, and don't know? And are they ignoring the concern?

More News
The FDA position, according to documents posted on the official FDA web site, is that the status quo is valid, and that monitoring of benzene levels is ongoing, including follow-up with any company whose product is found to contain benzene levels higher the 5 pbb.

It is noted in Rangan's essay that there should be little difficulty in altering the formula of soft drinks to avoid the combination identified above, a combo that's known to generate benzene. Rangan notes that some manufacturers have already altered their product formulas to avoid benzene contamination, but not all have done so.

It may leave you with second thoughts about maintaining a heavy consumption of soft drinks.

And if you, perish the thought, were ever to be diagnosed with MDS or some other disease linked to the presence of benzene...

And you consume a lot of soft drinks...

Talk to a lawyer.

If you or a loved one have suffered from cancer due to Benzene exposure, please contact a lawyer involved in a possible [Benzene Lawsuit] who will review your case at no cost or obligation.
Request Legal Help Now

Posted by
johnnie compton
on January 12, 2016
my lab report came back stateing i have mds syndrome or MYELODYSPLASTIC SYNDROME IVE BEEN DRINKING MONSTER ENERGY DRINKS FOR THE LAST 8 YEARS IVE NOTICED IT HAS BENZOIC ACID AND ASORBIC ACID AND VITAMIN C AS WELL IN IT AND I DIDNT KNOW 1 FULL CAN HAD 2 SERVEINGS I THOUGHT IT ONLY HAD ONE UNTILL RECENTLY I READ IT ON THE BACK IN VERY SMALL WRITEING THAT IT ACTUALLY HAS ABOUT 2 FULL SERVEINGS IN IT . COULD DRINIKING THIS ON A REGULAR BASIS CAUSE BEZENE LEVELS OF A DANGEROUS LEVEL TO CAUSE ME TO HAVE MDS'' ALSO KNOWN AS '' MYELODYSPLASTIC SYNDROME IF SO I WOULD BE VERY INTERESTED IN FILLEING A LAWSUIT FOR DAMAGES I HAVE MULTIPLE WITTNESSES WHO TOLD ME TO STOP DRINKING ENERGY DRINKS IN MY FAMILY SO I QUIT ONLY TO BE DIAGNOSED WITH MDS NOW I AM MEETING WITH MY CHIEF OF STAFF VA HOSPITALS ASSITANT DR AMEDEO THIS WEEK TO DISCUSS IF I ACUTALLY HAVE IT. AND GET A COPY OF MY MEDICAL RECORDS TO PROVE IT.. COULD YOU HELP ME OUT IF SO IN BECOMEING MY ATTORNEY OF RECORD AND PROCEED WITH LITIGATION AGAINST THE OWNERS AND MANAFACTURERS OF MONSTER ENEGERY DRINK I DO BELIEVE 8 YEARS OF DRINKING DOUBLE SERVEINGS WITH THE COMBINATION OF BENZOIC ACID WITH ASORBIC ACID AND VITAMIN C AND WHATEVER ELSE IS COMBINED IN THESE DRINKS COULD MAKE ENOUGH BENZENE WHICH IS KNOW TO CAUSE CANCER IN HUMANS , WOULD YOU BE ABLE TO REPRESENT ME