In Bankruptcy Tied to Divorce, Expectations Are Changing

There is brave talk about one of the worst recessions in history finally ending. That said, bankruptcy and bankruptcy debt continues to be a factor for more and more Americans. Bankruptcy law allows for the means to start again, but the road is hard and the involvement of a personal bankruptcy lawyer is a given. 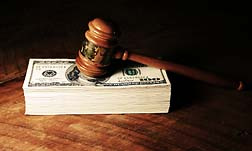 The cost of health care is what drives most personal bankruptcies. However, so too was the tendency to rack up unprecedented levels of personal debt thinking that the gravy train would never go off the rails.

And sometimes, you're just a young family trying to make your way in the world without extravagance, before finding yourself derailed by job loss.

The Brown family is one such example. As profiled in today's edition of the St. Petersburg Times, Greg Brown had been making good money in Florida as a plumber—so much so that his wife Michelle could stay home with the kids.

Then he lost his job when the construction industry fell apart. It happened only a month after the Brown family moved into the first home they'd ever owned. Now there's no income and only $2000 left in the bank.

Michelle is looking for work now, in an effort to stave off bankruptcy. She rises in the wee hours just to be ahead of the pack for online job postings. They have eliminated all extra spending and clip coupons. Thankfully their marriage is sound.

Sometimes marriages do fail as the result of, or in tandem with financial hardship. A lawyer based in Tampa told the St. Petersburg Times that today more people are seeking bankruptcies and foreclosures along with divorces and "I'm seeing more requests to modify child support and alimony."

More BANKRUPTCY News
Candace Harriman, who practices law in Tampa, told the newspaper that many of her clients are having difficulty meeting their financial obligations due to job loss or pay cuts. The darling of cash-strapped municipalities and corporations these days, the 'furlough,' allows employers to save money by mandating time off without pay. Fewer days at work yes, but also fewer dollars in the pay envelope.

Harriman is seeing a shift in the wishes of her clients. No longer are they interested in the equitable division of assets. Rather, the greater importance is the minimization of debt. Rather than battling to keep the house, divorcing spouses are now attempting more often than not to push a house tied to a challenging mortgage onto the other person.

Such are the times and bankruptcy presents an even more arduous and complex web than it once did.