With the flooding season now upon us (Fargo), and the summer hurricane season approaching, the insurance industry is bracing for its own season of payouts. But for every challenge faced by the insurance industry, homeowners face two: dealing with disaster, followed by the potential for bad faith insurance when it is time to collect what is owed. 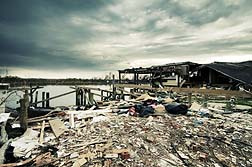 And it doesn't just happen to the homeowner. Big business has frustrations in this arena as well. That observation is borne out in the difficulty Penford Products Co., of Cedar Rapids, is having in collecting on its insurance policy for a devastating flood last year.

It's a bad faith insurance claim worth millions. Ironically, one of the insurance companies involved in the balk is AIG. The same company that's been in the news of late and vilified by Americans for awarding bonus payments worth millions of taxpayer money to executives, is allegedly refusing to pay the full freight—in tandem with another insurer—to one of Cedar Rapids' oldest industries.

The company has been forced to lay off staff as a result, and Iowa taxpayers are on the hook for about $2 million in state assistance in an effort to keep the company going after the promised insurance coverage didn't come through.

Or, at least that's the interpretation. Penford's insurance policy is reported to be quite complex. National Union Fire Insurance Company of Pittsburgh (the AIG unit) and ACE American Insurance Co. of Philadelphia shared equally in providing coverage—and while not denying responsibility for coverage, do indeed dispute claims based on interpretations of the complex document.

Here's the story. In June of last year the Penford corn milling plant on the Cedar River in southwest Cedar Rapids flooded. The company filed a total claim for damages of $50 million (Penford now says, according to reports, that damages will exceed $56 million).

However, the insurance companies have so far paid out only about $20 million. Penford's initial claim filed July 14th of last year sought $14.99 million for losses through August 31st. What Penford got, was $2.5 million, or $1.25 million from each of the two insurers.

A month later Penford requested a further payment of $7.5 million against losses, at that time, in excess of $28 million. However no payment was made, which the insurers deemed premature.

The standoff appears to have forced Penford to negotiate with its creditors and lay off workers. As well, $2 million in state funds were secured to help Penford, at a time when ethanol prices are soft, together with a weakened demand for starch sold to paper producers due to the recession.

Penford has since filed a lawsuit, in US District Court in Cedar Rapids, seeking a declaration that the insurance companies are made to be responsible for the claims, and that unspecified damages are duly paid.

The insurers countered with a legal response earlier this month. In dispute, for example, is a statement by Penford that it was without electric service from June 12 to July 23—a claim disputed by the insurers. However, it has been reported that most of the disagreement hinges on interpretation of the policy.

The value of the policy represents $300 million in coverage, for which Penford paid a reported premium of $655,858 according to court documents. The company obviously felt that with coverage totaling $300 million, a damages claim of $50 million or so would be well within the parameters, and thus has filed a bad faith insurance claim.

More INSURANCE News
The insurance companies don't see it that way, and appear to be basing their denial of payment primarily on the interpretations of a reportedly complex policy.

At the end of the day, however, who really gets dinged in the end is the little guy—the plant worker who is suddenly laid off and faces the prospect of looking for work along with thousands of others in a soft economy. And a company that can't pay its bills because an insurance company didn't come through passes that pain along.

Examples of alleged bad faith insurance teach is that insurance is not the safety net it once was. And yet, we continue to pay for it as if it was. It is increasingly harder to collect on a claim, even though premiums continue to be paid.

If you have suffered losses in this case, please send your complaint to a lawyer who will review your possible [Insurance Lawsuit] at no cost or obligation.
Request Legal Help Now