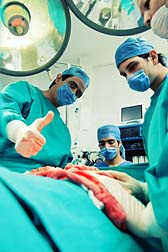 As recently summarized in the Louisville (Kentucky) Courier-Journal, a routine hysterectomy turned into a nightmare for Debbie Daniels when her doctor suggested he do a tummy tuck at the same time. However, according to the June 6th, 2009 edition of the Courier-Journal the doctor had never received training in the 'tummy tuck' and had also been removed from the staff of another hospital for performing such procedures without the proper credentials.

Just a few days after her surgery the plaintiff's wound burst, leaving behind a hole in her abdomen about the size of a basketball. Several surgeries followed and Daniels was placed in a medically induced coma.

The now-permanently disabled plaintiff, a former respiratory therapist in Paducah, sued her doctor. The insurance provider for the defendant—American Physicians Assurance Corp. (APAC)—hired an expert witness who told the carrier she was "appalled" at the conduct of the doctor, citing his professional behavior as "inexcusable and indefensible."

Internal documents revealed the insurer valued the plaintiff's damages at $1 million. And yet, the company allegedly stonewalled Daniels for two years, only to offer her a token $75,000.

More BAD FAITH INSURANCE News
The plaintiff later settled for $650,000 after the insurer upped the ante on the eve of the initial trial in 2006. By that time Daniels was unemployed and in the depths of financial hardship. She had two children to feed.

She won that round. In early June a jury awarded the plaintiff $3.8 million in Jefferson Circuit Court. The verdict included punitive damages of $3,479,277. In making the award, the jury found that the insurer acted in bad faith by delaying payment when it knew its client was liable.

A spokesperson for APAC said her employer does not comment on litigation. However Ann Storberg, vice president of investor relations at the firm told the Courier-Journal that the company's policy is to pay claims when liability is clear.

Such is the world of bad faith insurance.

If you have suffered losses in this case, please send your complaint to a lawyer who will review your possible [Bad Faith Insurance Lawsuit] at no cost or obligation.
Request Legal Help Now