A new study has reportedly found a link between the use of Avandia and an increased risk of bone fractures. Other reported Avandia side effects include heart attack and liver failure. The maker of Avandia now faces lawsuits alleging patients were not properly warned about Avandia risks. 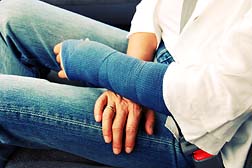 The study, published in the online edition of PLoS Medicine (September 29, 2009), found that patients taking thiazolidinedione diabetes drugs, which includes Avandia and Actos, could face an increased risk of fractures 1.5 times the risk of people not taking those drugs.

Avandia and Actos are used to treat type 2 diabetes by helping to control the patient's blood sugar levels. For the study, researchers examined over 1,800 over the age of 40 who were prescribed either Avandia or Actos and suffered a bone fracture after taking the drug. The researchers then adjusted their findings to account for the likelihood that some of the fractures occurred because of the patient's age and concluded that patients on either Avandia or Actos had approximately a 1.5 times greater risk of a bone fracture than people not taking either of the drugs.

Researchers noted that previous studies found an increased risk of fractures in women and that the fractures mainly involved fractures of the arm, wrist, hand or foot. This study, however, found that the link between Avandia or Actos and fractures was similar in both men and women. Furthermore, the fracture sites included the patient's hip, spine, arm, foot, wrist or hand. Finally the risk of fracture increased as the duration of exposure to the drug increased, up to approximately 2.0 times the risk in patients exposed to Avandia or Actors for four years or more.

An editor's summary that accompanies the article notes that the study was undertaken because the evidence for an association between thiazolidinediones and bone fractures is limited. "Given the large number of people with diabetes, it is important to understand the benefits and risks of thiazolidinedione treatment of diabetes as fully as possible," the editor writes.

More AVANDIA News
The editor also notes that it is not yet clear how drugs like Avandia and Actos weaken the bones and admits that it is possible that the people who experience fractures share an "unknown characteristic that affects their chances of breaking a bone." However, the findings of the study do agree with findings of other clinical trials, which suggests that bone fractures are a real side effect of treatment with Avandia or Actos.

GlaxoSmithKline, maker of Avandia, faces lawsuits alleging that the company failed to properly warn users of the drug about its serious side effects.