An investigation released November 19th, 2008 by the Canadian Broadcasting Corporation (CBC) revealed instances of mistreatment of two doctors who raised some of the earliest warnings with regard to Avandia and links to heart attack. The doctors, both based in the US, reported feeling intimidated after SmithKline Beecham, the forerunner to GlaxoSmithKline, attempted to silence their warnings, and were alleged to have interceded with their superiors. 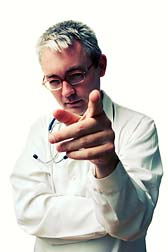 Last years' blockbuster study published in the New England Journal of Medicine revealed what is now common knowledge not just in the medical community, but with many Americans who suffer from Type 2 diabetes.

When it was first introduced, Avandia was hailed as a breakthrough in the control of blood sugar levels. It has since been vilified as harboring a 43 percent higher risk of heart attack, together with a 64 percent greater risk of dying of cardiovascular problems.

Dr. Mary Money was trying to make that point back in 2000. The internist from Hagerstown, Maryland found that of 33 patients she had put on the then-new Avandia drug, 20 went on to develop serious fluid retention, a known symptom of heart failure.

Dr. Money reported her findings to her colleagues, and other hospitals. Dr. Money also sent reports to the US Food and Drug Administration (FDA) as well as Avandia manufacturer SmithKline Beecham (now Glaxo).

SnithKline Beecham officials met with Dr. Money, during which she apprised the Avandia manufacturer of her concerns.

The officials, according to the CBC, then went allegedly over her head and fired off a letter of complaint to Dr. Money's employer at Washington County Hospital. She was asked, in the communiqué to her employer, to be stopped from "disseminating misinformation about a useful medication." The manufacturer is alleged to have feared that doctors would be reluctant to prescribe Avandia based on her findings.

The episode left Dr. Money feeling intimidated, as it did Dr. Stephen Lippman, an endocrinologist who assisted Dr. Money in her investigation of Avandia side effects for heart attack.

"I felt intimidated; I know she felt intimidated," Lippman said in comments provided to the CBC. "We both at the time, and still do, think that they were essentially trying to stonewall us and really impede a resolution of the issue."

They were also not happy with the way in which Avandia officials allegedly described them to their superiors at the hospital. "We were basically country bumpkins who didn't know how to investigate this stuff," said Lippman.

It should be noted that the CBC was unable to interview GlaxoSmithKline, as they declined an interview request for the purposes of the investigation. However, in an emailed statement the manufacturer denied any wrongdoing.

More AVANDIA News
Meantime a medical ethicist from the University of Manitoba feels that while threats of lawsuits, or threats to go to an employer do happen, they are rare. Arthur Schafer feels that a more effective way to silence a medical whistleblower is through the issuance of research grants to hospitals and universities, and lucratiuve consulting contracts to doctors.

Nonethelss a US Senate committee is said to be investigating how widespread the alleged bullying of doctors might be.

The CBC in its November, 2008 summary of its investigation cites researchers as estimating that by 2007 thousands of Avandia patients had died since the drug was first brought onto the market in 1999. Since the release of the study that appeared in 2007 in the New England Journal of Medicine, sales of Avandia have plummeted as doctors switch their Type 2 diabetes patients from rosiglitazone to a safer alternative.

A number of lawsuits have been launched against Avandia manufacturer GlaxoSmithKline over the risk factors the drug is thought to carry for heart attack and cardiovascular difficulty.