The new era emerging in the automotive industry will have an impact on issues surrounding auto defects and those encumbered with a defective car. Thanks to a loophole built into the US auto industry rescue package, liability for the defective auto no longer appears to be a worry for the newly-reborn General Motors and Chrysler. 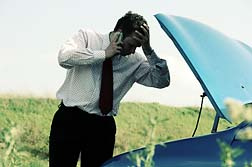 Meanwhile, a new report forecasts that more than 3,400 Americans will be injured or killed by a defective GM, or Chrysler vehicle during the first year of the post-bankruptcy era.

According to the July 12th, 2009 issue of the Transportation Business Journal, both automakers provided data to the National Highway Traffic Safety Administration (NHTSA) over a 5-year period covering 2003 to 2008 with regard to death and injury claims. The data was then fashioned into a report released by Safety Research & Strategies, a consulting and advocacy firm in Rehoboth, Massachusetts.

"Public Safety at Risk: Bankruptcies Leave Legacy of Defects, Injuries and Deaths" paints a gloomy picture. Between the third quarter of 2003 and the fourth quarter of 2008, Chrysler fielded 3,497 death and injury claims. Over at GM, that figure was 15,284. Averaged out on an annual basis, the figure is 636 and 2,779 individual deaths and injuries respectively, accounting for 47 percent of all claims filed against manufacturers during that period, the report says. During that time, GM and Chrysler represented 38 percent of the market share.

More AUTO DEFECT News
Give the disproportionate share of claims vs. market share, Safety Research & Strategies President & CEO Sean Kane maintains there is every reason to conclude that injury and death rates will continue. "But the claims will disappear and that will impact the rate of GM and Chrysler recalls and public safety in the future," he said in a statement.

"Automakers and NHTSA use death and injury data to monitor and recall defective vehicles," Kane added. "If the claims aren't filed, we lose an important defect surveillance tool. And if the companies bear no liability for deaths and injuries caused by the uncorrected defects, what incentive do they have to recall?"

According to the Transportation Business Journal a provision in the bankruptcy agreements would allow the two automakers to escape auto defect liability for vehicles built pre-bankruptcy. Recalls of the defective automobile would still be required to repair defects. However under the agreement, GM and Chrysler would no longer be responsible for injuries or deaths caused by auto defect.

If you have suffered losses in this case, please send your complaint to a lawyer who will review your possible [Auto Defect Lawsuit] at no cost or obligation.
Request Legal Help Now