An auto defect involving a 2000 Ford Explorer that was allegedly responsible for the death of an Arkansas woman is the subject of a defective automobile lawsuit in Texarkana. An auto defect lawyer is representing the family of the late Mona Troutman. 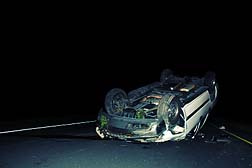 Troutman was seriously hurt and died from her injuries 14 days later.

The defective car lawsuit, filed August 4th in the Texarkana Division of the Western District of Arkansas, states that the accident was the result of tread separation from a defective tire, together with the Explorer's "unreasonably dangerous nature of handling and stability."

According to the complaint, the accident occurred after the right rear tire on the vehicle, a Futura Dakota H/T manufactured by Cooper Tire, failed when the tread separated from the rest of the tire. The tire at the center of the defective car lawsuit was manufactured at the Cooper Tire facility in Texarkana and was "unreasonably dangerous and unfit for its intended purposes and foreseeable use due to its defective condition," the plaintiffs argue.

Various members of the Troutman family along with passenger Linda Pharis (who was also injured in the accident) filed individual lawsuits against Cooper Tire and Rubber Company and the Ford Motor Company.

"During the rollover, the Explorer's roof crushed, the seat belt restraints failed to keep Mona Troutman and Linda Pharis in contact with their seats, and the side window glazing broke out," the complaint states.

More DEFECTIVE AUTO News
Plaintiffs argue that the defendants failed to monitor the field safety records associated with their respective products and did not report safety data to the National Highway Traffic Safety Association. What's more, the Ford Explorer is considered by the plaintiffs to be unreasonably and dangerously defective and is rife with design effects including problems with control, stability, roof crush and occupant restraints.

The lawsuits, which will be heard by US District Court Judge Harry F. Barnes, were summarized in the Southeast Texas Record.

It should be noted that while GM and Chrysler are somewhat protected from product litigation stemming from their bankruptcy proceedings, it is believed that no such restriction against auto defect litigation applies to Ford.

If you have suffered losses in this case, please send your complaint to a lawyer who will review your possible [Automotive Lawsuit] at no cost or obligation.
Request Legal Help Now