If every driver used the emergency brake without fail, then the following auto defect may not be as dangerous as it otherwise might be. However, we don't—and when a defective car is recalled for a problem involving the transmission and the capability for the defective automobile to remain in 'Park,' the possibilities for accident and injury are endless. 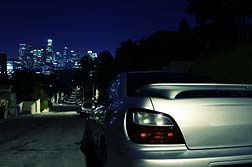 Such is the case with the recent recall of various models of General Motors vehicles due to a potential defect in the shift lever that could cause the vehicle to roll away. A total of 277,000 vehicles were recalled, of which 75,000 were actually sold. So far no crashes and injuries have been reported, but neither the automaker nor the consumer can rest until every one of those 75,000 is brought in and repaired.

However, in the affected vehicles this may not be the case and the vehicle's transmission may not be locked into 'Park' at all.

Imagine the chaos that could ensue if the vehicle is parked on a slight incline, on the street at the top of an extended hill. The defective automobile may not move initially as the driver exits the vehicle. However slamming and locking the door might be just enough transferred energy to get the car rolling. Without resistance from a locked transmission, there is little preventing the vehicle from rolling downhill.

The driver may not be aware of the problem until it's too late.

Most drivers would engage the emergency brake on a steep hill, but even that cannot be assumed.

And most private driveways are built on an incline, in order to allow for the migration and flow of rainwater to the street. Imagine the potentially tragic consequences were a driver of one of these defective cars to place the transmission in 'Park' and shut the vehicle off, only to have it begin to roll backwards while fumbling for his briefcase and laptop.

Imagine if a child were behind that car, perhaps riding a bicycle and passing behind a vehicle that has been parked and seemingly immobile—but in reality teetering on the verge of motion until a gust of wind, a vibration or even serendipity causes it to move on its' own.

It is at times like these when a child, a passerby or another car will be coming along when a car suddenly rolls down an incline driveway into the street, without warning or guidance.

More DEFECTIVE AUTOMOBILE News
This writer has seen it happen.

According to the manufacturer the potential defect could also contribute to a starting problem—which could be an issue were a car to stall in traffic and the driver is unable to get the car safely going again, simply by putting the transmission into 'Park' before attempting to turn the key, only to find that nothing happens.

If you have been adversely affected by this particular auto defect, or another defective automobile—or have suffered from a defective car issue that is not of your doing, you would be in good stead to seek the services of an attorney. GM in particular and the auto industry in general may be troubled at the moment, but it does not dismiss a manufacturer from the responsibility of building a safe vehicle.

If you have suffered losses in this case, please send your complaint to a lawyer who will review your possible [Defective Automobile Lawsuit] at no cost or obligation.
Request Legal Help Now