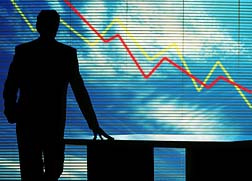 And the stories—especially in light of the current cold and hard economic climate—are appalling. One retired couple is said to have lost $300,000 by investing in the Schwab YieldPlus Fund and Schwab California Tax Free YieldPlus Fund. The couple, a retired corporate executive and his wife, filed an arbitration claim earlier this month in an effort to recover damages.

The problem with auction rate securities mirrors the underpinnings of the current economic crisis currently gripping the nation. Auction rate securities were considered 'as good as cash' largely because they were so liquid and the market was so strong. Investors could park sums of money for periods of time and earn a fair rate of return, expecting that they would be able to easily flip the securities relatively quickly, given the collection of buyers willing to take them on.

Trouble was, auction rate securities were not as good as cash. There was risk after all. Given that much of the investments were tied to bonds with a long maturity date, the inability to vend a security would often result in an investor not having access to his money when he needed to.

Thus, a fair chunk of risk. But given the steaming market and the expectation that there would always be buyers available, the mantra 'good as cash' soon morphed into reality.

But it wasn't reality. And as soon as buyers stopped coming to the party, the market imploded almost overnight. Investors expecting to be in a position to easily redeem their principle investment and their profit, realized too late that they either lost their investment, or lost control over the investment for the life of the bond, sometimes decades away from maturity.

In the Charles Schwab case, it is alleged that brokers and representatives of Charles Schwab failed to disclose to investors the high concentration of Funds assets invested into high-risk mortgage and asset-backed securities. Such concentration forced Schwab to sell off the asset-backed and mortgage-backed securities at fire sale prices in the face of record redemptions as investors raced to retreat from the market.

It has been reported that the combination of illiquidity coupled with investor retreats caused the Schwab YieldPlus Fund to descend into a free-fall that has been described as catastrophic. Net assets of the Fund had peaked at $13.5 billion as of July 31st 2007. Less than a year later, the Fund had dropped to a value of $507 million.

That's a drop of a staggering 96 percent.

Imagine the reaction of the retired couple that not only lost $300,000 in the debacle, but also had stipulated a preference for low-risk investments in exchange for a modest tax-free income.

Schwab is accused of failing to disclose the asset mix and the risks associated with the funds.

Of course, Charles Schwab is but one of numerous players who allegedly stayed on message that auction rate securities were as good as cash when the opposite was true. In another incident, a unit of Citigroup is said to have induced American Eagle Outfitters Inc. to take a $258 million stake in auction rate securities with full knowledge that the market was collapsing.

American Eagle has launched an action against Global Markets Inc. claiming that the unit of Citgroup misrepresented the auction rate securities as safe instruments with superior liquidity.

Meanwhile, investors who lost money from the collapse of the auction rate securities market would be well advised to seek legal counsel. It has been alleged that numerous brokers were slow to inform their clients that some, or all of the investment assets were in auction rate securities, and that the market was collapsing. Many investors, as a result, went ahead with acquisitions and other financial commitments with the expectation of selling off auction rate securities when needed, to free up capital.

The collapse of the market and the freezing of funds proved a hardship for many investors who had newly purchased a home, or had been counting on funds invested in auction rate securities to fund post-secondary tuition for children.

More AUCTION RATE SECURITIES News
The alleged deceptive behavior of some in the financial sector didn't help, either. Certain principals of the Charles Schwab funds stand accused of misleading investors by encouraging them to hold on to their investments, all the while dumping $2.9 million Schwab YieldPlus Fund shares from the portfolios of other Schwab proprietary mutual funds.

All the more reason to seek out the services of an auction rate securities attorney, while there is still time. Some, but not all companies have already settled with their investors. Assuming there was a breach in the fiduciary duties on the part of your broker or funds manager, you may have an auction rate claim. But time is short. If you have been victimized by the sudden collapse of this market and have suffered hardship as a result of the loss, or lack of access to your funds, speak to an auction rate securities market lawyer right away.

If you have suffered losses in this case, please send your complaint to a lawyer who will review your possible [Auction Rate Securities Lawsuit] at no cost or obligation.
Request Legal Help Now