Asbestos Contamination in Montana: Can Libby Be Saved?

It may be too late for the workers and residents of Libby, Montana who have suffered from asbestos health issues and battled mesothelioma lawsuits for years. But now representatives from the Mount Sinai Hospital and School of Medicine are going in with a team of investigators to deal with the future of Libby. 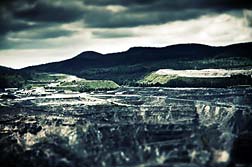 A series of three investigations is being launched into the disease pathology of the town in an effort to determine what needs to be done to clean it up.

Asbestos-laced vermiculate ore has been mined at Libby since 1923, suggesting a nearly century-old contamination. Rates of lung disease, asbestosis and asbestos mesothelioma have emerged at much higher rates than in comparable populations. A major clean-up of the area will have to be undertaken if Libby is to be saved for future generations.

"The asbestos-related disease in Libby is far more aggressive and rapidly progressive than what's seen in most asbestos-exposed workers, with high rates of cancers and severe effects on respiratory function," says Dr. Stephen Levin, Associate Professor of Preventative Medicine at Mount Sinai School of Medicine.

Investigators will initially focus on particular risks of exposure to Libby asbestos during childhood, when lungs are still developing and maturing. The second phase will compare lung scarring among Libby residents who were exposed to asbestos only in their environment (and not at their place of employment). Researchers hope to discover why Libby residents have advanced rates of lung scarring.

The third investigation will examine the relationships between autoimmune disorders, antibody abnormalities, and CT-scan evidence of scarring lung disease. Autoimmune disorders such as rheumatoid arthritis and lupus have been found to occur more frequently in Libby.

More ASBESTOS MESOTHELIOMA News
Many residents were exposed through ambient air or to mine tailings and other contaminated materials provided to the town by mining companies for the construction of ball fields, school running tracks, playgrounds, public buildings and facilities, as well as for private gardens and house and business insulation.

The health crisis potentially extends well beyond the borders of Libby, since millions of homes and businesses in North America have used vermiculite from Libby as attic insulation, fireproofing and soil conditioner.

A recent mesothelioma lawsuit against WR Grace, operator of the now-closed Zonolite mine, failed to prove that WR Grace was criminally responsible for the sickening and deaths of hundreds of workers during the years it operated the mine.