Danny was diagnosed with malignant asbestos mesothelioma in October 2008. He lived a further six months before the disease claimed his life. He was just 59. Danny worked for Dowell Company as a member of the cement crew between 1975 and 1985. From 1975 to 1980 he was lethally exposed to asbestos, and that led to the diagnosis of mesothelioma. 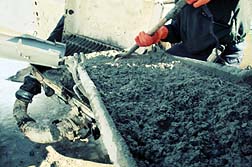 Danny and his wife of 23 years obviously felt that his employers were negligent in providing him with adequate protection from asbestos. So they filed a lawsuit. And they won. On October 5, a jury in Texas awarded Danny's wife $1.2 million as settlement of the case, compensation for suffering and anguish caused by something that should never have happened in the first place.

What Does Asbestos Exposure Look Like?
During the court case Danny testified to breathing dust from the dumping of asbestos-containing cement additives into a mixing hopper at the bulk cement facility while working for Dowell. He used asbestos mud additives three to four times per week at a minimum for four to five years, and described a "continuous smokestack" of dust, to the point that one could not see a street light.

It's that very fine dust that is so dangerous: it contains microscopic asbestos fibers that are easily inhaled, becoming embedded in the lungs. Those same fibers can also become embedded in clothing, which has been known to cause secondary mesothelioma in the spouses of men who worked around asbestos, very often as a result of years of washing contaminated work clothes.

More ASBESTOS MESOTHELIOMA News
Asbestos is a known carcinogen, so you inhale the dust - you have a cancer causing agent in your lungs. People who have been exposed often develop problems breathing – a shortness of breath known medically as asbestosis. This can lead to asbestos mesothelioma – a type of cancer for which there is no cure, and can take several decades to manifest. Many men like Danny, were exposed in the 1970s and 1980s, and weren't diagnosed with disease until the next century – this century. That type of lag time is not unusual.

There are some early warning signs, though, which include chest pain, fatigue, shortness of breath, hoarseness, cough, fluid retention and abdominal swelling.

If you or someone you know suspect that you may have been exposed to asbestos, it may be a good idea to consult a healthcare professional. There are also lawyers who specialize in asbestos litigation, for those who have been diagnosed. Because, as Danny's widow bears testimony, employers are held accountable.