Leslie Corry's husband worked at Union Asbestos & Rubber Company during the 1950s, and was exposed to asbestos fibers on a regular basis. And he brought those toxic fibers home on his clothing, exposing his wife, who later died of asbestos mesothelioma resulting from secondary exposure. 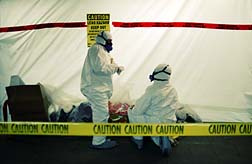 Earlier this month a jury awarded Mrs. Corry's family $2 million in a lawsuit they brought on her behalf. The case hinged on the fact that during all the years that Leslie's husband worked around asbestos he inadvertently exposed his wife. Neither one of them would have been aware of the dangers of asbestos exposure--it was the 1950s after all, not a lot of information on asbestos mesothelioma was publicly available or widely known. To that point the attorneys for the Corry family argued that the defendants, namely Union Asbestos & Rubber Company, UNARCO Industries Inc., Pneumo Abex, LLC, Honeywell International, Inc., Johns-Manville, Raybestos-Manhattan, Owens-Illinois, Owens Corning and Metropolitan Life Insurance Company, did know about the dangers and concealed information, and agreed not to warn employees, area residents and consumers about the dangers of direct and secondary exposure to asbestos materials.

The dangers are very real, however, and it can take years – decades even – for symptoms to manifest or for a diagnosis of asbestos mesothelioma to be made. This is because the latency period for the disease can be between 10 and 30 years.

In the case of Mrs Corry, she was exposed to asbestos fibers that became airborne while washing her husband's work clothes. And, predictably, it took years for the disease to manifest.

More ASBESTOS MESOTHELIOMA News
If you think that second hand exposure would not be sufficient to cause harm, think again. According to the Environmental Protection Agency, there is no such thing a safe level of asbestos exposure. The Environmental Working Group Action Fund estimates that 10,000 people a year die from asbestos-caused diseases the United States, which includes one out of every 125 American men who die over the age of 50.

Tragically, Leslie's story is by no means unusual. In the UK, a number of middle-aged women who washed asbestos-covered work clothes belonging to their father or other family member are now dying from mesothelioma as a result of their second hand exposure. In the United States, the problem of second hand asbestos exposure is equally as serious. More women are suffering from related diseases, including women under 40.