Antitrust laws are being put to the test in what could turn out to be a landmark ruling by the Supreme Court. An antitrust act lawsuit originally filed by a supplier to the National Football League (NFL) and already dealt with by a series of lower courts will soon be up for consideration by the highest court. And the implications of the antitrust policy ruling could be significant. 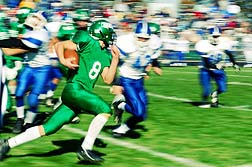 In 2004 American Needle Inc. (ANI), an apparel company based in Illinois, launched an anti-trust suit against the NFL over an agreement entered into by the NFL and Reebok. For about two decades ANI had a non-exclusive contract with the NFL to supply logo knitted wear and baseball caps. Then, in 2000 the league entered into a contract with Reebok.

According to the August 9th edition of the Orlando Sentinel, ANI accused the league of illegally restraining trade in violation of Section I of the Sherman Act. The NFL denied the allegations, and a series of lower court rulings found for the defendant.

The plaintiffs pressed on to the Supreme Court. The defendant—rather than maintain its defense—instead petitioned the Supreme Court to consider the National Football League as a single entity, rather than 32 separate franchises in business with one another.

The Sentinel notes that the NFL has pursued single-entity status in court on seven prior occasions dating back to 1982. Each time it has come up empty.

However, all eyes will be on the Supreme Court when it returns to the bench in October, not only for the ramifications on the operations of the NFL if it grants the petitioner its request, but for the fallout relating to other professional leagues such as the National Hockey League (NHL), National Basketball Association (NBA) and even Major League Baseball (MLB).

More ANTITRUST News
ANI says: "The [Supreme] Court has stated, on more than one occasion, that application of the Sherman Act to professional sports teams is wholly consistent with Congressional intent," according to ANI's petition for a writ of certiorari to the Supreme Court.

The NFL, meanwhile, in its respondent's brief to the Supreme Court, maintains that "[In] collectively licensing their marks and logos as a means of promoting their inherently integrated entertainment product, the [NFL] and its member clubs are, or at least function as, a single entity and therefore cannot constitute the plurality of economic actors required for a Section I conspiracy."

This challenge to antitrust policy and subsequent impact on antitrust laws and the antitrust act will be viewed with much interest.