Is Director Overlap on Google and Apple Boards Antitrust?

The presence of two high-powered directors overlapping on 'friendly' corporations that are increasingly competing with one another is raising the yellow flags with watchers of antitrust laws. It was revealed this morning in the New York Times that Google and Apple share two members amongst their boards of directors—a potential violation of antitrust policy where it pertains to the Antitrust Act. 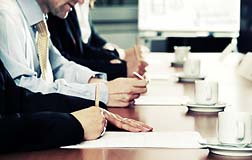 So far, there hasn't been anything untoward that would suggest an outright violation of antitrust decorum. However, that hasn't stopped the Federal Trade Commission (FTC) from launching an inquiry.

The crux of the matter involves the sharing of two directors by both Google and Apple. Eric E. Schmidt, CEO of Google and Arthur Levinson, former chief executive of Genentech, both sit on the boards of directors for both companies.

The FTC therefore will be looking for any blatant violation of the Clayton Antitrust Act of 1914, which prohibits an individual's presence on the board of two rival companies if competition between the two companies might be compromised as a result.
Section 8 of the Clayton Act specifies 'interlocking directorates' and although rarely enforced, the FTC is nonetheless quietly nosing around.

"Government actions under Section 8 are rare," says Andrew I. Gavil, an antitrust expert and a professor at the Howard University School of Law, in comments appearing in the New York Times this morning. "But they are brought under circumstances when the presence of a common director on competing boards is likely to be anticompetitive."

It should be noted that Apple and Google have worked co-operatively in many areas, including the development of Gmail and Google Maps protocols for the Apple iPhone. This alliance benefits Google in turn, as the iPhone apps drive increasing amounts of traffic to Google mobile services.

However, there appears to be competing interests as well, given Google's development of the Android operating system for mobile phones. Android is the installed platform for the T-Mobile G1, a rival to the iPhone. Android is not only expected to appear more frequently in rival mobile devices, the platform is also appearing in netbooks—small, lightweight portable computers—which could serve as competition with some Apple laptops.

There are other areas where the two companies compete, which might be viewed by some as a violation of antitrust laws under the Clayton Act. Web browsers, for example: Google operates Chrome, while Apple competes with Safari. Meanwhile Apple's iTunes and Google's YouTube appear to be in heightened competition for online distribution of music and video.

Under the Clayton Act, interlocking directorates are not considered problematic if revenue from those products over which companies compete, is less than 2 percent of either corporation's sales.

Some industry watchers say that while it appears such heightened competition between two 'friendly' rivals suggests an impropriety by having two individuals straddling the boards of directors for both companies, the fact remains that many corporations in the technology sector are both allies and competitors. If an investigation does lead to too many questions, more often than not a director sitting on the board of a competitor will resign his seat, rather than face increased investigative scrutiny or legal arguments.

Still, questions of antitrust policy are being raised. The New York Times reported this morning that individuals close to the FTC investigation—which is not a public process—only spoke on condition of anonymity. Google and Apple aren't commenting.

There are also a few other overlaps the FTC will no doubt be looking into as its investigation moves forward. Christine A. Varney, who last year named Google as a probable source of future antitrust concern over its near-monopoly in the arenas of Internet search and advertising, was recently confirmed as the head of the antitrust division with the Justice Department.

More ANTITRUST News
Google's Eric Schmidt was recently appointed to President Barack Obama's advisory council on science and technology. Schmidt campaigned for Senator Obama during his run for the White House and also served as an advisor on the transition team.

Legal experts do not expect that Google's ties to the Obama administration through the company's Chief Executive will carry any weight, or deter the FTC investigation. It is generally believed that the investigation will be fair and forthright, with no one entity singled out, or given a free pass.

That's because antitrust laws are held in high regard in an effort to support the Antitrust Act and the antitrust policy it represents. Competition is not only healthy; it helps to maintain a balanced marketplace where manufacturers, or service providers are not given the opportunity to take unfair advantage of an increasingly challenged consumer. Those who try will be made to answer against the full measure of the law.