When Antitrust Stifles a Move up the Ladder

When an employee of one company jumps ship and defects to a competitor, is such an event cause to suspect a breach of antitrust laws? Most would agree that such practice is simply healthy competition. However, what happens when companies are alleged to collude NOT to hire each other's employees? Is that a violation? Antitrust policy is a complex animal and the Antitrust Act is brought to bear on a number of different issues. 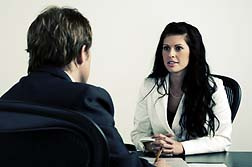 According to a story appearing June 3rd of this year in the Washington Post, various alleged negotiations with regard to the recruitment of a competitor's employees by some of the nation's largest tech companies just might constitute a violation.

At the very least, the US Justice Department is looking into just that.

The investigation by the Justice Department is, according to the Washington Post in its preliminary stages. The focus is on a handful of well-known technology companies with household names.

Google, is one. So is its primary competitor in the search engine world, Yahoo. Apple, the manufacturer of the iPhone is a third and biotech firm Genentech rounds out the primary foursome, although there are others.

No officials in the Justice Department would comment officially on the investigation. However the Washington Post stated in its June 3rd edition that two unidentified sources with ties to the investigation claim that many prime players in the high-tech world have agreed not to hire away top talent from a competitor.

"This could be collusive restraint on trade, which could have a serious impact on competition," said Albert Foer, president of the American Antitrust Institute.
The Washington Post reported that according to unidentified antitrust experts, such a practice could serve to stifle competition and attempt to maintain market strength unfairly.

The potential violation of antitrust laws could also serve to underscore what is often fierce competition for top engineering and business talent. What's more, promising talent attempting to make their mark in the sector and looking to further their careers, may be unable to do so if a move to a competitor, regardless of the talent possessed by the individual and the need and desire to hire by a prospective employer, is seen to be a barrier erected unfairly.

More ANTITRUST News
In May, the US Justice Department initiated an investigation into board ties between Google and Apple, which are considered competitors. Meanwhile the Federal Trade Commission, according to the Washington Post, has launched a review of the settlement offered by Google to book authors and publishers with regard to their rights to digital versions of their works.

It's one thing for today's high-tech companies to benefit from the tremendous reach achieved via the wired, interactive world—and many traditions and business models have been stood on their ear.

However, were high-tech companies to engage in alleged activity that is shown to be in violation of antitrust laws, together with a basic acumen of fairness as it relates to antitrust policy, then charges of wrongdoing according to the statutes of the Antitrust Act are a distinct possibility.