Advanced Micro Devices (AMD) filed an antitrust lawsuit against Intel Corp., causing stock shares for AMD to soar after news that the company may be close to changing and improving its manufacturing practices.

On May 5, 2008, AMD confirmed that they had filed an antitrust suit against Intel Corp. that alleges Intel of using unfair business practices to prevent AMD from winning contracts with major computer manufacturers. AMD manufactures microprocessors that are used in computers and the allegations state that Intel took various actions to keep AMD from being able to distribute these microprocessors. 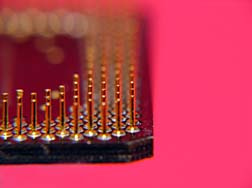 AMD says in the lawsuit that Intel paid large computer manufacturers such as Dell and HP to not buy microprocessors from AMD. The claim is that this was in an effort for Intel to preserve its monopoly. There are also allegations that Intel also paid Acer, Gateway, and Japanese OEMs, as well as other distributors and system builders. As a result of the filing, Intel has delivered 150 million pages of documentation to AMD. Both of the companies have been discussing how to handle the case and Intel has requested 75 depositions per side. However, AMD is asking for 486 depositions.

More ANTITRUST News
Intel has denied the allegations against them, claiming that the only reason why the beat AMD is because their products are better. AMD says that Intel shut them off from various sectors, especially if Intel couldn't buy into companies that would use them specifically. Furthermore, AMD alleges that Intel paid off customers to abandon development of computer models using AMD. AMD says that this was done through a discount scheme that made it uneconomic for AMD to compete for business.

Doug Freedman, an American Technology Research analyst, said that AMD may be due a large cash payment if Intel decides to settle the lawsuit. Freedman is not saying that there is, in fact, a settlement, but there may be some merit in the case that will put AMD in a good position.

In the meantime, the stock market is awaiting the "asset light" program that AMD will be launching soon. AMD plans to contract out its manufacturing to other companies. This has been a strategy that Wall Street has waited for AMD to follow through with for a long time. Because of the delays, AMD had experienced sharp declines in their share price in 2007.

All parties are scheduled to appear at a hearing on June 5, 2008 to make their arguments to the judge.

If you have suffered losses due to Antitrust, please contact a lawyer involved in a possible [Antitrust Lawsuit] to review your case at no cost or obligation.
Request Legal Help Now