A recycled bill introduced in both chambers of Congress aims at improving antitrust protections for rail shippers by repealing a basket of antitrust exemptions currently enjoyed by rail services. Legislators say the move will protect shippers from the possibility of being held captive by "price gouging," according to Senator Herb Kohl (D-Wis), who introduced the Railroad Antitrust Enforcement Act in the Senate. 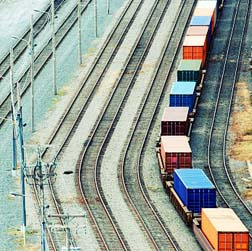 "This bill will bring scrutiny to freight railroads and encourage competition in this highly consolidated industry," he said. Representative Tammy Baldwin (D-Wis) introduced companion legislation of the same name in the House.

The Association of American Railroads (AAR) has expressed its distaste with the measure, citing that railroads, in its view, are already subject to most antitrust laws that govern business in the US. The Association goes on to state, according to a report, that the proposed legislation would only benefit a minute group of shippers who fear the railroads are overcharging their customers.

However, those who buy into the overcharging suspicion need only look to the alleged actions of four of the nation's largest rail carriers—activities that now serve as the basis for a class-action lawsuit that cleared legal hurdles late last year.

The four rail carriers, and the nation's largest—Norfolk Southern Corp., Burlington Northern Santa Fe Corp., CSX Corp. and Union Pacific Corp. were accused of illegally fixing, and inflating fuel surcharges between July 2003 and June 2007. Those charges have been denied by the operators in question, who moved to have the class action dismissed, but were unsuccessful.

The proposed legislation, "would add a new layer of government control and intrusion on the nation's freight rail industry," the AAR said in a statement last year.

However, advocates of the bill need only point to the allegations inherent with the aforementioned price-fixing case involving the nation's four largest rail carriers, and the reality that in a time that rail freight volumes were dropping, the rail carriers were somehow managing to enjoy record profits.

To that end, a recent study commissioned by the American Chemistry Council (ACC) estimated that railroads had 'conservatively' overcharged shippers on fuel surcharges by $6.5 billion from 2003 to 2007. As an example, Burlington Northern Santa Fe (BNSF) reported a profit for 2006 of about $1.87 billion. The ACC study, put together by research company Snavely King in 2007, reveals that BNSF "over recovered" $925 million in fuel surcharges for the year.

Assuming the figure is true, that would mean that more than half of the BNSF total profit for the year was derived from surcharges, rather than from operations.

BNSF is but one example. There are others.

Assuming the ACC allegations are even remotely accurate, there is the suggestion that rail profits and stock price were inflated by fuel surcharge profits—by as much as 73 percent in some cases.

Jack Gerard, president and chief executive of the ACC, said after the study was published that, "This is the greatest train robbery of the 21st century."

The ACC report came out in 2007, and the original antitrust bill was introduced in Congress the same year, but stalled. It's back now for another go. At issue are various protections that may have contributed to such robust profits, even though rail traffic has been slowing.

A good example of this were the comments of one building products industry shipper who told a Bear Stearns analyst in 2007 that despite lower demand for rail carriage, he expected rate increases of 3-5 percent in Q1 2008, and he had "no alternative but to pay the increase while complaining to local politicians and regulators."

More ANTITRUST News
The returning bill would attempt to take the wind out of antitrust protection that the rail industry—akin to Major League Baseball—has enjoyed for decades. Numerous rail routes are served by only a single carrier, and rarely is a route served by more than two.

The rail industry has gone on record as suggesting the proposed legislation is both unnecessary, and will prove ineffective—and will not carry the advantage shippers are hoping for.

Some industry analysts agree, and cite the greatest result will be a marked increase in litigation aimed at the rail industry by shippers attempting to recover overcharges. The latter could have a dramatic effect on rail profits, if recent lawsuits targeting the airline industry are any indication. The latter sector was hit with billions of dollars in fines and damages, for alleged price-fixing, anti-competition and antitrust activity.

Stay tuned, to see if the trains stay on their financial track, or if their bottom lines go off the rails.