In what is considered a first of its kind, a community hospital was accused of violating the Antitrust Act and antitrust laws when it allegedly tried to shut out a competing, physician-owned hospital—a violation, it has been reported, of antitrust policy.

The defendants admitted to no wrongdoing even though it settled for a $700,000 judgment, which represented the cost of a two-year investigation by the State of Texas.
However, even with Memorial Hermann Healthcare System's denial of the allegation of a systematic discouragement of health insurers from doing business with Town & Country Hospital, it appears they got the last laugh… 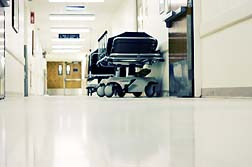 Town & Country Hospital, which was physician-owned, is no longer in business. It closed in 2007.

This may be the first antitrust settlement in the healthcare system, but it may not be the last given the number of lawsuits proceeding across the country. Doctors who own, or have a financial stake in private hospitals allege that dominant hospitals are attempting to insulate themselves from competition at the expense of patient care.

Smaller, but certainly broad in its scope. Town & Country was a general acute-care facility with an emergency department and plans to offer a full range of patient services.

General hospitals argue, in this and similar cases, that physician-owned facilities often choose more profitable treatments and patients with fewer liabilities. The result is that general, or community hospitals are stuck with the cost of emergency and uninsured care.

As well, Memorial Hermann said that it acted within the law, noting that there is nothing preventing a larger hospital from approaching a third-party payer to 'express concern' with regard to a competing entity.

However, the plaintiffs in the case claim that the alleged actions of Memorial Hermann eventually resulted in the closure of their facility. A separate lawsuit filed by the owners of the former Town & Country Hospital is pending against Memorial Hermann in Harris County District Court and should go to trial in September.

Competition is key in the healthcare field, according to Texas Assistant Attorney General Mark Tobey. Competition breeds value and ensures patient choice, he says. According to Tobey physician-owned hospitals have shown to offer reduced costs and improved quality over community hospitals.

More ANTITRUST News
He says that Town & Country Hospital's status as a general; acute-care facility was a key consideration. "That was a fairly important distinction for us."

Industry watchers note that this alleged violation of the Antitrust Act signals that more scrutiny of the healthcare system and the various players involved, is coming in an effort to enforce antitrust laws and foster compliance with antitrust policy.

"The injunction in place should make it clear to Memorial Hermann and to the health care community at large," says Tobey, "that the attorney general is going to be watching this situation."