SJS Advil-Ibuprofen: "I Got Out Alive"

Bonnie says her struggle with SJS Advil-Ibuprofen stemmed from a car accident in 2001. She was prescribed Percocet for some time but got addicted to it so her doctor suggested Advil—Stevens-Johnson Syndrome (SJS) symptoms began almost overnight. 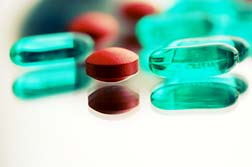 "After the accident and during my recovery when I got addicted to Percocet I realized it was not a good situation, both for my health and for being a mother," says Bonnie. "My doctor advised me to take Advil and literally overnight I developed a rash on my leg. People said it looked like a tattoo gone bad. It looked like a bad burn mark and spread over my body—now I know it was because I was still taking Advil.

I didn't get noticeably sick like other people's symptoms with SJS—at least from what I have read—and I have grown a huge tolerance to pain. As well, I couldn't be away from my kids so I pretty much put up with these symptoms. I had a lot of pain in my back around my kidney area but I don't have kidney stones. Every time I took the Advil it got worse; I finally figured out that this med might be to blame. My eyes are the worst problem; I can barely see because my eyelids are so puffy and sore. I also had watery eyes with a lot of mucus at first so I went to the doctor last week and she has referred me to an ophthalmologist.

I was taking up to 9 Advil a day because of the pain. I was told this drug was one of the safest things for me to take—how wrong that advice was. I could kick myself for taking so much. And my mum is so angry with the drug manufacturer; she says that we believe everything the drug companies tell us; she feels sorry for me. My mum said that I have to be more aware of what I am taking but I believed in my doctor; after all she got me through my surgery and getting over this car accident was horrific. I wake up every day in pain.

More SJS ADVIL-IBUPROFEN News
I am just in the process of figuring out all these SJS side effects. There are so many things that I have to explain to myself, symptoms that I never thought were related to the Advil. Since I stopped this med about two weeks ago, the rash is clearing up and the pain in my back is gone. I had a blood test and it showed something odd with my thyroid, nothing more. My kidneys seem OK but my doctor is sending me to physiotherapy to see it there is something wrong with my muscles. And I am getting more blood tests.

My doctor suggested that I stay away from drugs and try a natural approach so I'm getting lots of massages and I will soon start massage therapy. It gets to the point where I want to crawl under a rock. I am totally freaked out about taking anything at all now so I don't trust any pharmaceutical drug anymore—especially Advil. All I can do now is just live with the pain. But I do consider myself lucky after reading some stories about SJS. I got out alive."

Stevens Johnson Syndrome is a life threatening reaction that has been linked to many over-the-counter medications. According to the SJS website, Non Steroidal Anti Inflammatory drugs such as Ibuprofen (Advil, Children's Advil, Motrin, Childrens Motrin and Nuprin) are a leading cause of the disease.
READ ABOUT SJS ADVIL-IBUPROFEN LAWSUITS

If you have suffered losses in this case, please send your complaint to a lawyer who will review your possible [SJS advil-Ibuprofen Lawsuit] at no cost or obligation.
Request Legal Help Now