More MRI HEALTH RISK News
A new study has found that people who live in areas with more MRI machines use the machines more often, suggesting an increase in MRI health risks such as kidney disease and failure. 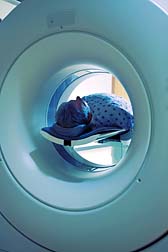 According to Stanford University researchers Jacqueline D. Baras and Dr Laurence Baker, there would have been 5.4 percent fewer lower back MRIs and 9 percent fewer back surgeries in 2004 if patients reporting lower back pain lived in areas with the lowest availability of MRI machines, MedPage Today reports.

This finding was determined after the researchers collected data on Medicare patients who received medical attention for low back pain from 1998 to 2005. This information was compared with data showing the number of MRI machines in various areas.

However, the researchers add that past studies have shown increased surgery rates may not benefit a patient suffering from lower back pain, and that MRI machines "may detect anomalies" unrelated to their condition.

There have also been reports that some people experience MRI contrast side effects during the hospital-given test, particularly kidney patients on dialysis.