Houston's Rice University, in conjunction with the Texas Heart institute, is the recipient of a $1 million Challenge Grant from the National Institute of Health to improve the sensitivity of current MRI technology while lowering the chance of MRI health risks, the most common of which is the toxic metal known as gadolinium. 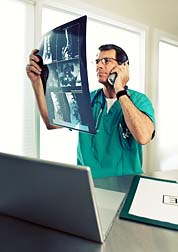 The grant will largely help perfect contrast agents initially invented by Rice in 2005 that increase the sensitivity of MRI scans, allowing doctors to more easily and effectively diagnose patients.

Gadolinium has been linked to more than 200 cases of Nephrogenic Systemic Fibrosis, a potentially fatal disease that distends or discolors skin, weakens the muscles and tightens the connective tissues between joints, inhibiting a person's ability to move.

If you or a loved one have suffered losses in this case, please click the link below and your complaint will be sent to a defective products lawyer who may evaluate your MRI Health Risk claim at no cost or obligation.
Request Legal Help Now