Albert was injected with a gadolinium-based contrast agent during two MRIs and he believes he also had a contrast agent with two angiograms. Now he wants to know if his kidneys shut down due to MRI health risks.

Albert (not his real name pending a lawsuit) doesn't have any NFD/NFS symptoms so far, but he was diagnosed with kidney failure—and the doctors have no explanation why or how…gadolinium based contrast agents haven't been on the market that long, possibly not long enough to determine long-term side effects? 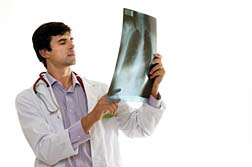 "I am a diabetic and my concern is whether these dyes caused my kidney failure," says Albert. "When you get to be my age, time really seems to fly by (I am 68). I have regular blood tests every month because of my diabetes and recently, one test showed that I had some protein in my urine. My regular doctor set me up with a nefrologist [kidney specialist] and he did the 24-hour urine test. That's when I found out that my kidneys were only at 50 percent capacity--it happened pretty quickly.

Nobody knows how this could have happened; not even my nefrologist has an answer.
The only reason I thought it was the dye was because (coincidentally) I was working at a dialysis clinic as the facility's technical supervisor. Invariably, you become friends with nurses and patients and one patient told me about lawsuits pending against MRI dyes and a head nurse told me that whenever I have an MRI, I should request a test that doesn't use the dye—the contrast agent. Furthermore, the medical insurance companies don't like to approve MRIs or MRAs with contrast agents because it is more expensive, not to mention how much it will cost them if a patient develops serious side effects…

I know there was a dye with my angiogram because one of the nurses told me to drink plenty of water and I asked why this was necessary.
'Because the dye has to be flushed out of your kidneys and if you don't drink lots of water, it could affect your kidneys,' she said.

More MRI HEALTH RISKS News
The two times that I had the MRI, I wasn't told to drink lots of water afterward.

The last time I had blood work it was stable and my next appointment is sometime this year, but this is cause for concern; you always wonder—hopefully everything will be OK.

One of the main concerns for me is keeping my kidneys at the point where they don't get worse; I have to control my blood pressure. Your kidneys are a filter like a screen on a window and the tighter the screen, the less bad stuff, such as protein, will get through. That is why it is so important to keep blood pressure under control: the higher the blood pressure, the higher the chance that you will get very ill. If this happens to me, the next step is dialysis and I don't want to go there…I've seen that firsthand."