Carlsbad Open MRI lab is putting into place safety checks regarding Magnetic Resonance Imaging (MRI) procedures that require the use of injecting contrast agents, about a year after warnings about MRI health risks, namely gadolinium kidney failure associated with the dye. 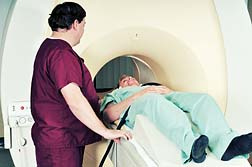 Carlsbad Open MRI says it will only inject patients with the recommended, weight based dose, and only those patients who have an acceptable glomerular filtration rate, a test that determines renal function. In addition to obtaining a more thorough history, the needed laboratory tests are required prior to the contrast injection.

There have been only 350 confirmed and documented cases of nephrogenic systemic fibrosis (NSF), out of the 100 million administrations of gadolinium-based contrast agent world-wide but some experts believe that many patients could have this horrific man-made disease and have not yet been diagnosed.

Researchers in Japan report in Clinical Nephrology (2009;71(2):217-220) a 54-year-old woman who developed "thickening of the skin with brownish hyperpigmentation on the lower legs spreading later to all extremities, which limited joint movement and resulted in contractures" one month after her last MRI including an intravenous gadolinium contrast agent (Magnevist)—the woman had received multiple MRI exposures with gadolinium.

"She remains at present unable to walk or extend the joints of the upper and lower extremities and needs analgesia for sharp pain in the thickened skin," said the researchers, who added that various factors, including multiple exposures to gadolinium-containing MRI contrast agents, inflammatory burden, and hepatic disease might have played a role in the development of NSF, but concluded that, "Regardless of ethnicity and the type of contrast agent, we should be aware of the potential development of NSF in patients with renal failure."

More MRI HEALTH RISKS News
According to a study from Kaohsiung, Taiwan, a total of 153 magnetic resonance imaging (MRI) examinations, including 81 contrast-enhancement, were identified in 127 patients with advanced chronic kidney disease at stage five undergoing MRI or angiography examination between January 2005 and July 2007. "NFD/NSF was diagnosed in none of the 105 patients on haemodialysis but in one of the 22 patients on peritoneal dialysis," wrote W.C. Chen and colleagues, Chang-Gung University. "Our results lend support to the predisposition of gadolinium-containing contrast agents to the development of NFD/NSF in patients with advanced renal failure, even before the initiation of dialysis," the researchers concluded.

Bayer's Magnevist (a leading brand of contrast agents, which also includes MultiHance, Omniscan, OpiMARK, and ProHance) has settled possibly hundreds of lawsuits out of court for undisclosed amounts. According to Bloomberg.com, as of February, 2009 Bayer faced 241 lawsuits over Magnevist of which 40 cases had entered into settlement discussions. One plaintiff's attorney said that Bayer was settling cases in which a biopsy confirmed a diagnosis of NSF, and Magnevist was the only contrast agent used.