MRI Risks: When the Cure is Worse than the Cause

Gotta love those man-made diseases. In an era where modern medicine is designed to eradicate disease, modern medicine is not above creating disease, either. Such is the case with MRI and kidney failure and, specifically, Nephrogenic Systemic Fibrosis (NSF), a debilitating disease only recently recognized and linked directly to gadolinium contrast dyes used in MRI procedures done on patients with pre-existing kidney problems. 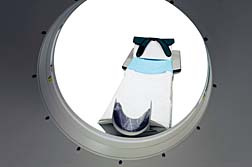 The disorder is characterized by high blood pressure, burning, itching, swelling and hardening of the skin. The latter has been likened to becoming entombed in one's own skin, and has been described by those made who suffer from horrific NSF as 'hell on earth.'

That has certainly been the case for Jeanie Deason, a kidney patient in Tennessee who underwent an MRI with a gadolinium-based contrasting agent and is now comfined to bed with painful hardening of her skin and joints. The poor woman's NSF has progressed to the point where her legs and right arm have frozen into a bent position, and she now requires 24-hour care. The only time Deason can make it up from her mattress is when her parents help her into the bathroom.

Deason even had to miss her daughter's graduation.

MRI, or Magnetic Imaging Resonance, has been a boon for the early detection of disease-causing tumors and has been hailed as one of the greatest advancements in modern medicine. Contrasting agents are routinely used in an effort to provide a clearer picture for the MRI technologist, and gadolinium-based agents are commonly used. While gadolinium is not found naturally in the human body and is by nature toxic, the kidneys are in most cases efficient in expelling the toxin from the human body in short order, preventing any kind of gadolinium toxicity.

The latter produces MRI health risks and forms the basis for NSF, and the connection between NSF and the use of gadolinium-based contrasting agents during MRI procedures appears to be irrefutable. Researchers at Yale University have reported that the vast majority of patients they have studied with NSF symptoms—95 percent—had undergone an MRI with gadolinium two, to three months before their symptoms appeared. Further, researchers at Massachusetts General Hospital report that kidney patients having undergone MRI with gadolinium were 10 times more likely to develop NSF than patients who had not been exposed to gadolinium.

Deason's condition has worsened, but there is renewed hope for her however. An experimental procedure dubbed extracorporeal photopheresis (EP) has the potential for reversing Deason's plight. EP involves removing blood from a patient's body, exposing it to ultraviolet light, then re-infusing the exposed blood into the patient. The exposure to UV is thought to bolster the body's natural immune system for fighting disease, and researchers have been buoyed by results that have been described as dramatic. However, the cost of the treatment is prohibitive, at $8000 per. Deason's HMO, TennCare, originally refused to fund the treatment because it was experimental. However, in April a judge in Davidson County Chancery Court overruled TennCare's position, acknowledging that while the treatment was experimental, it was in Deason's case medically necessary. Just recently the HMO decided not to appeal, so Deason's treatment can go ahead.

She just wishes the treatment could have been started two years ago, before the NSF had progressed to the point it has today. That's when her fight with her HMO reportedly started.

It has been reported previously that any patient in line for an MRI using gadolinium-based agents should be screened for kidney malfunction first—and as a last resort, should gadolinium be required, the kidney patient should undergo dialysis immediately thereafter, to rid the body of the gadolinium agent the kidneys cannot expel on their own.

Should these precautions not take place and a patient develops NSF, a call to a legal professional would be in order.